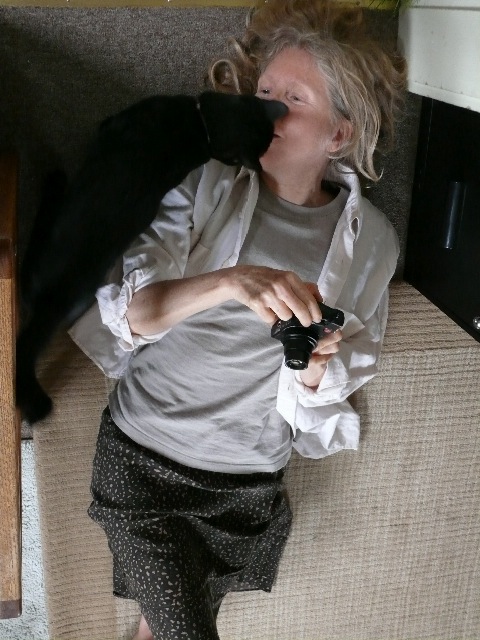 I found this brief piece I had written about our cat, Flynn, from April 2014.  I still miss him and reading it brings back the amazing connection I had with him. He was an extraordinary person, even though a nonhuman one.

I went for a long walk yesterday late afternoon with my cat, Flynn–Bill started out with us. We usually go for a walk with him after dark, it’s easier because he’s so shy and encountering people and especially dogs! is a challenge. He’s not very afraid of dogs, and knows how leashes work, but the dogs often don’t handle it well. But Bill and I set off down the road and Flynn stood in the driveway looking after us (he has freedom to come and go through his cat door)–then suddenly made a decision and came galloping after us, with a tentative look, his tail down until we bent down talking to him to encourage him, then he knew it was okay and his tail came up like a flag–so happy.
We often try to escape from him, believe it or not, sneaking around the house and losing him when we want to walk somewhere distant and he knows he’s not supposed to go with us.  He loves, loves, loves to go for a walk with us, just like a dog does–it’s the highlight of his day and we’ve had many interesting adventures on these walks. When Bill turned back, Flynn and I continued for more than an hour, exploring the wooded school grounds nearby as it grew dark. People think cats are solitary, not oriented to groups, but Flynn understands perfectly how to interact as part of an interspecies pack and also knows when I lose him in the dark and will do something obvious at the right moment to let me know where he is.
He led the way and mostly I followed him. We communicated where we wanted to go and paid mutual attention to what the other one wanted to do. It was quite wonderful to be in this space where some of the differences between cat and human dissolved in the shared experience. The bond between us felt so much deeper in this respectful space. I think we both get sometimes get frustrated because of our different perceptions and different ways of communicating. I think Flynn understands a very great deal about the limitations of human awareness. From a cat’s perspective, I think humans often seem outrageously obtuse. For example, at one point in our walk, as it grew dark I was trying to cross a lighted walkway in front of a building. Flynn did his usual cat thing, disappearing silently and I couldn’t tell where he was. I turned back and went to the corner of the building looking backwards for him, only to discover that he was already ahead of me, circling patiently back to follow me. So, I let him poke around in some places and check them out and then we turned back again and set out to cross the lighted walkway. This time Flynn made sure to stick with me as I crossed it quickly, he galloped across it just in front and to the side of me, making this thumping thunder, thunder, thunder sound with his feet. He has this way of making a surprisingly loud noise as he runs–he can make the ground thunder or he can be completely, to my ears, silent. He plays a game with Bill and I when we walk together, we call it “Zooming,” he drops way behind and then rushes up behind us, suddenly making the thunder, thunder, thunder as he gets close and darts between our two sets of feet. It’s an interesting challenge he’s set for himself, as we are often close together, sometimes holding hands. He’s been kicked inadvertently a few times. When he was younger, he would make this tiny chortle just as he went between us; a cat expression of humor and victory, I think–like gotcha.  He doesn’t make that sound any more, but will sit down in front of us, victorious, and wait for us to come up and bend down and talk to him and stroke him and acknowledge we’ve been “zoomed.” So I believe he was completely aware that evening that I had trouble knowing where he was that first time we tried to cross and he was making quite sure that I could both see and hear him as we crossed that walkway together in the second attempt.  I believe that Flynn’s intelligence and the depth of his soul is in no way inferior to that of a human, and I’ve never been disappointed by holding to that assumption. Just the opposite, he continually surprises me by the power of what he understands and how capable he is of communicating with me if I am mindful and pay attention to what he does. I am always shedding my short-sighted human beliefs regarding what he knows and can do when he relates to me.